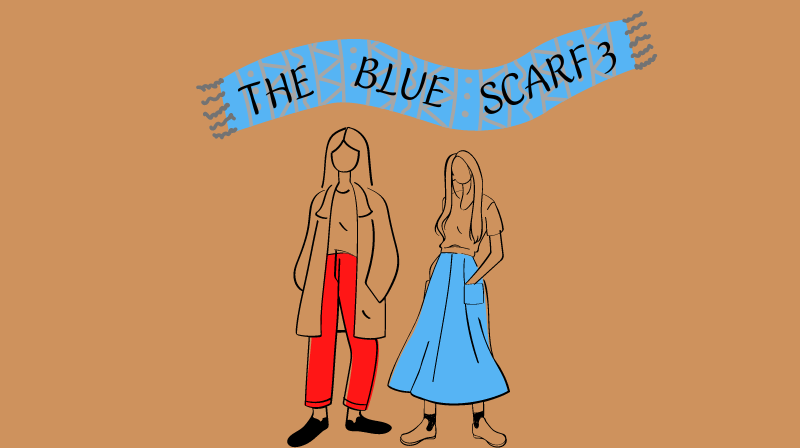 Mila was twenty-five, she was alone and cold. She was waiting for her wife. She missed her terribly everyday. She missed everything about her; her soft red hair, the way she made her feel safe, the way she laughed at her jokes. Even her annoying habit of ringing the doorbell three times in a row. She wrapped herself in a flimsy cover and went to bed. The house had become way too big and she felt like she was the only person left in the world.

The next morning Mila sat on the armchair nearest to the door. She waited like she had for years. She was almost falling asleep when three long doorbell rings shook the air. She jumped up and ran to the door. She opened it breathlessly and there she was. Catherine, her beautiful wife, the light of her world, finally back and soaking wet under the rain. She jumped on her and hugged her as hard as she could.

Catherine took off a damp and battered piece of cloth she was wearing as a scarf. It was her blue scarf! Their blue scarf. She put it on Mila and pulled her closer. They kissed.

"You're not alone anymore." Catherine whispered.

Catherine was twenty-six and she was cold. She rested her hand on the trunk of an old oak tree to pause and steady herself. She was breathing heavily. The ground was covered with fallen leaves. Everything was so silent, so still.

She arrived at the clearing. She fell on her knees once she reached the place. She hadn't had the courage to go back after that dreadful day.

She rested her hand on the stone in front of her, trying to steady herself once again, as if her energy could come back to her. But nothing could give it back to her. She had lost her center, her light, her love. She was out of balance. Forever.

She traced her finger over the incision. "Mila. Loved." it said.

Catherine took something out of her pocket. It was the blue scarf, almost unrecognizable after so many years. It was dirty and ruined. She put it on her love's tombstone.

"Goodbye, my love." she whispered, coming forward until she touched the stone with her forehead. Its coldness sent a shiver down her spine.

After a while she got up and walked away. Alone, again.