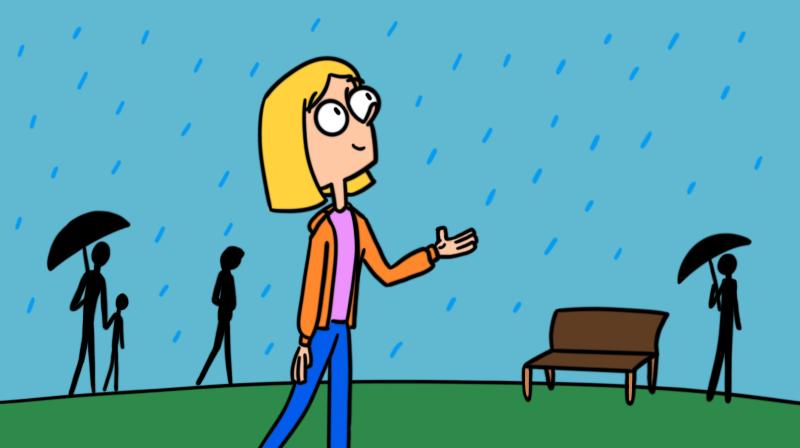 Skye was home alone on a summer afternoon. She was aimlessly doodling on a piece of paper, when she heard a noise coming from outside. She tried to look through the window, but she couldn't tell what was causing that persistent sound. She decided to go on her balcony. When she was there she realised.

Rain. It was raining.

Skye had seen the rain just once. It was the day her parents died in a car crash. She was also in the car that day. Her mother had told her to get out and Skye had thrown herself out of the moving car. She had fallen down and got up just in time to see her parents' car explode. Then it had started raining.

Skye shook her head to get rid of that memory. She was living with her aunt now, but at the moment she was at work. The girl kept looking at the rain. She wanted to touch it, to feel it on her skin, she wanted it so much that her whole body started shaking.

Skye breathed deeply and jumped out of the balcony. She lived on the first floor, so it was pretty easy to reach the ground. She raised her arms, feeling the rain on her skin, soaking her clothes and her hair.

She then started walking, not really sure where she was headed.

She reached her school without thinking about it. She had just been concentrating on the feeling of the rain on her skin, her brown bangs sticking to her forehead, her clothes now completely soaked. She felt weirdly calm, even though she was near her school, where many people bullied her. But it was summer, the only people who still went to school were the ones who had summer classes and the teachers who taught them, like her aunt.

Skye didn't remember something very important though: Loretta; one of the girls who bullied her, had summer classes. She remembered it too late, when she saw her coming out of the school. Skye froze. She thought about running away, but she couldn't move. Then Loretta saw her.

"Hey loser! I was just thinking about how math makes me want to punch people." she was walking towards her way too slowly; she knew Skye couldn't escape. "And now you're here! That's what I call perfect timing."

Loretta stopped a few centimetres from Skye's face, she grinned at her and cracked her knuckles menacingly.

Illustrations by Elena
bully
detective
future
girl
mix
rain
short story
summer
Did you like it? Share it!