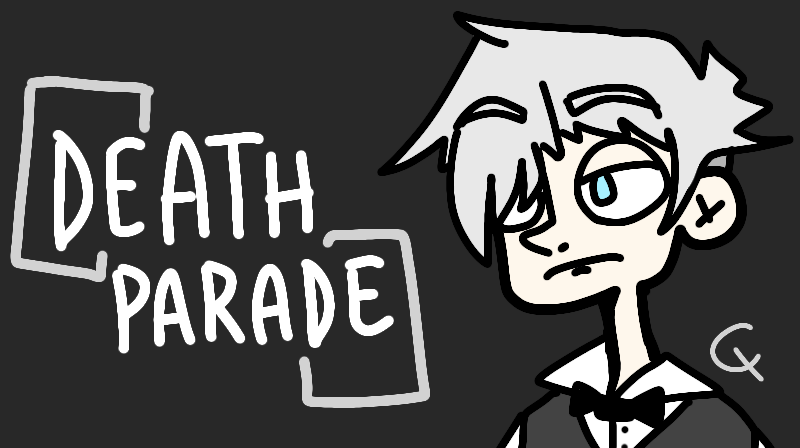 Death Parade is an anime television series conceived, written and directed by Yuzuru Tachikawa, produced by Madhouse and broadcast in Japan between January 9 and March 27, 2015. The series derives from a short film entitled Death Billiards, also produced by Madhouse for Anime Mirai 2013. In Italy, the rights to both works were acquired by Dynit for streaming on the VVVVID web TV.

Quindecim from the latin number fifteen, is a mysterious bar where a lone bartender named Decim works. Whenever two people on Earth die at the same time, they are sent to one of the many mysterious bars such as Quindecim, where they will be forced to participate in the Death Game a deadly game in which the secrets who brought them there and their fate will be revealed: Decim is in fact one of the judges who will decide whether their soul will be reincarnated or will end up in the void.

Decim is the Quindecim bartender, whose job is to judge the various Death Games assigned to him. His hobby is to build mannequins in the image and likeness of the guests he has had to judge. Later it turns out that, unlike the other judges, he is endowed with human emotions. Slowly he begins to have doubts about the actual validity of the Death Game method, believing that he has to get closer to humans to get correct judgments. In the last episode his veil of coldness falls, and he is seen expressing human emotions in their fullness by crying and smiling.

Chiyuki is a human who initially does not remember her real name. She is Decim's assistant and her job is to help him through the various games. Later it turns out that her memories were taken by Decim, who could not judge her in the games because, once she entered the Quindecim, she was already aware that she was dead. Later she will recover her memories: she was a professional skater named Chiyuki who after an injury was forced to retire; following this she fell into a deep state of depression and existential anguish, deciding then to take her own life. In the last episode she is finally judged by Decim, who assigns her to reincarnation.

Nona is Decim's boss who occasionally oversees the games. She plays pool often with Oculus, always winning. She was the one who brought human emotions into Decim, and she is always behind the fact that Chiyuki remembered being dead once she entered the Quindecim.
Ginti is another Death Game judge who runs the Viginti bar. He feels a certain hostility towards Decim, and unlike the other judges he seems to be more emotional, arrogant and touchy. For a while he too will have a human at his side, for which he will not be able to decide immediately to which judgment to assign her.

Oculus is labeled "the closest to God," Oculus spends his free time playing galactic pool, often in the company of Nona. He is a fervent supporter of the rules regarding judges, including that according to which they cannot feel emotions, as this would bring them too close to human beings. He has a beard in the shape of a lotus flower that he can stretch out to read other people's thoughts. Furthermore, he claims that God left a long time ago, for reasons unknown.
Clavis is an elevator attendant who almost always shows a warm and friendly smile.

Quinis a member of the information department who ran the Quindecim bar before Decim took his place. He is a jovial and friendly guy, a lover of human spirits. He is on good terms with Nona.
Castra is a woman who observes deaths around the world and then matches souls to the judges.

All the judges can see the memories of the couple who died but after judging them they forget the memories so they can be in partial every time there come new souls.

It's a nice anime, it's intriguing and it isn't that heavy but it has some blood scenes.
I really liked it I hope you will like it too!