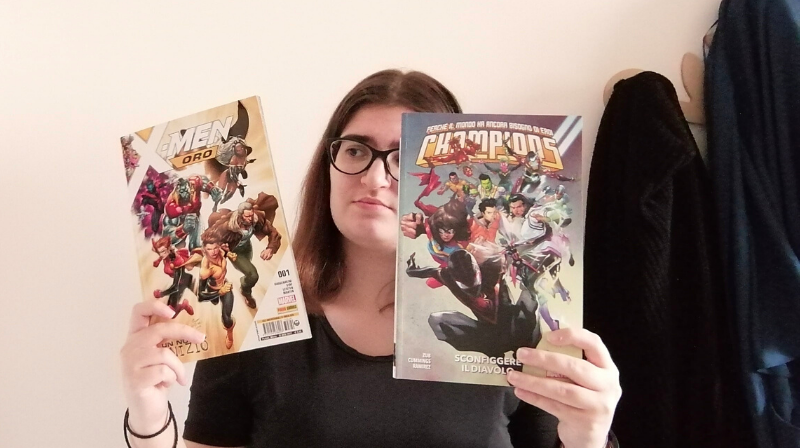 Superheroes and comics are super cool. I love them so much and their worlds feel familiar to me, because I've been reading and watching them for so long. But I get that for some people who are just starting their journeys into these fandoms some things might be very difficult to understand.

One of the many questions I get as a spiritual guide of the superheroes fandom (specifically the Marvel one) is: "What's the difference between Mutants and Inhumans?". Today I'll finally answer this question.

Before we start let me help you by telling you the most famous names of some Mutants and Inhumans. Wolverine, Professor X, Cyclops and Storm are Mutants, while Quake, Ms Marvel, Medusa and Lockjaw are Inhumans.

Let's start from the Mutants, who are probably the best known out of the two. They look like humans and behave like them up until puberty. In that phase of their lives they develop their powers, which can vary. Some of them are telepathy, teleportation, powers over a certain element, and so on.

Mutants have a particular gene in their DNA, called gene X. That's why the most famous Mutants superhero team is called the X-Men.

Their stories touch on a very important topic, which is relevant even today: fearing what is different from us. It might not be because they have blue skin and can teleport, or have eyes all over their bodies, but many people in our society are hated because they're different. It can be because of their skin colour, their sexual orientation or their gender.

These people are judged, but they should be accepted, because what makes them different makes them special. We shouldn't judge one another, but live in peace together. That's what the X-Men and the Mutants teach us.

The Inhumans have a pretty similar message, which is well represented in the tv series agents of S.H.I.E.L.D., but they have a more ancient history than the Mutants.

Many years ago the alien race Kree came to the Earth and experimented on some humans, in an attempt to create a race of super soldiers, half Kree and half human (creating super soldiers has always been pretty popular in the Marvel universe).

They succeeded, but then they left the planet and the Kree DNA has been passed down in certain families, waiting to be awakened. And here's the twist, because Inhumans, unlike Mutants, have to develop their powers using an external object, called the Terrigen Crystal, that when broken causes the Terrigen Mist to appear.

If a Inhuman encounters the Mist, a cocoon will form around them and then crash down. After this the Inhuman will have been transformed and they will have a superpower which fills a specific evolutionary need (so, if the future needs to be seen in order to prevent an apocalypse, then the next Inhuman will be a future seer).

And this is all folks! I hope this article was useful. And remember, if a superhero is neither a Mutant nor an Inhuman, but they have superpowers, you can call them meta-human or superhuman (unless their species hasn't already been told).

Now you know everything you need to tell Mutants and Inhumans apart!

Pictures by Sofia
agents of shield
aliens
comics
inhumans
innovation
marvel
mix
mutants
nerd
superheroes
superpowers
Did you like it? Share it!