Hey! Today was the 35th day of Oltrape 2020, our expedition to discover Emilia-Romagna region. The Aperadio brought us to Ridracoli, right at the feet of one of the hugest walls I have ever seen. Before that, we stopped at the Ecomuseo IDRO, an interactive museum where they tell the story of water on earth and its properties. It was so cool. I know I sound like a nerd since I'm talking about a museum, but I am. Later after that we found ourselves in the damping basin of the dam. It was so impressive to be down there, at the bottom of these 103 and a half meters of concrete.

We recorded the episode and the news service and we left in a rush because TAGLIATELLE AL RAGÙ are waiting for us. Finally a lunch not made with the day before sandiwches! We finished eating at 4pm, got back to the camping with our bellies full, started to pack because we have to leave the camping tomorrow for Bagno di Romagna. Bye!

24th AUGUST, STOP 34
Hello! As our 34th stop today we have been in Santa Sofia, a little town full of surprises in Romagna.
Once we left from the camping we got to the city centre, then we got down in the river that crosses the city. While we interviewed the mayor Daniele Valbonesi we found out that there is a natural reserve entirely isolated from mankind, and you can't enter unless you're with forest rangers

This made me think a lot. An entire natural area protected and preserved not to risk ruining it with human traces. Thanks to this, in this place we will never find cigarette butts or plastic bottles on the ground. Wouldn't it be nice to do this in every city? The experience of taking a walk would be far more interesting! Anyway, we're getting back to the camping now, see you tomorrow!

Francesca at the wheel

23rd AUGUST, STOP 33
Day 33. Premilcuore. The day has started with the usual wake up call at 7:30am. Anyway, we got used to that. We left for the daily stop very tired but willing to do our job. This morning I also had the luck of the travel in Apecar: 30 km, 1 hour of travel. Yay. Once we arrived in Premilcuore we managed to bring the Ape down to the river. Two minutes later I'm in the water, my penguin swimsuit on, all set for the news service. It couldn't have been better.

Anyway, we did our news duty and we finally got to take a bath in the river. Later on we got back for the episode. Quite a day today. The struggle of the day was repayed with a nice barbeque in the evening. There two sausages waiting on my plate so I have to say goodbye. GOODBYE!

22nd of AUGUST, STOP 32
Heeeey! Today's been the 32nd stop of Oltrape 2020. We explored the aemilian valley in these last 10 days and now we're back in Romagna! We have been in Brisighella, where we received a beautiful welcome, I got so surprised. It doesn't happen often, it really must be a carachteristic of people from Romagna because they were really welcoming also in the first stops of our tour! 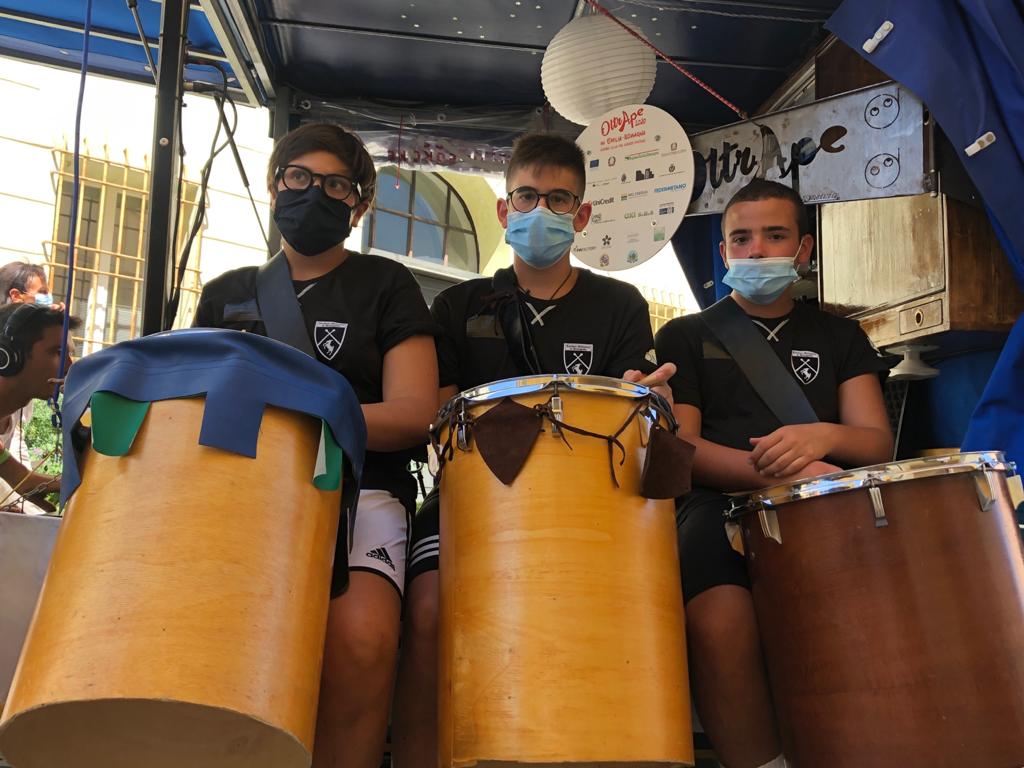 After our episode and news service we left for the camping, which is a bit hidden inside the woods and mountains. The view is amazing and the camping is too (the toilets are DECENT, there is no smell of pee and there's no weird spots anywhere...a miracle), take my word for it, I usually hate campings! We're preparing dinner now and we're gonna star eating soon, which is always a nice moment of the day. We'll be in Premilcuore tomorrow!

21st of AUGUST, STOP 31
I have finally found a moment of peace to tell you all about today. Let's start with the 7:30am wake up call and Ivan playing Hallelujiah by Pentatonix at maximum volume. I have to say it has been an appropriate choice, considering we slept in Villa Pallavicini, which is a place managed by the Bologna diocese. Anyway, we pack ous bags, we wash our armpits and teeth and we leave for Via del Frullo, Granarolo dell'Emilia (Bologna). We visited the paper and plastic selection system and the incinerator. I know it looks like those boring stuff you go visit, but I guarantee it's interesting. It's so simple to us to take out the trash, so we don't actually realize all the work that there's behind it. It's important to correctly make the separate collection. There are super technological systems to recover the most of what we throw away, not thinking too much about it.
News service, episode, we prepare the Ape again, stop at the supermarket and we got back to Villa Pallavicini. A hell of a day, but worth it. I don't think I could sweat this much and considering everyone's been avoiding me I think it's time to take a shower. Bye! 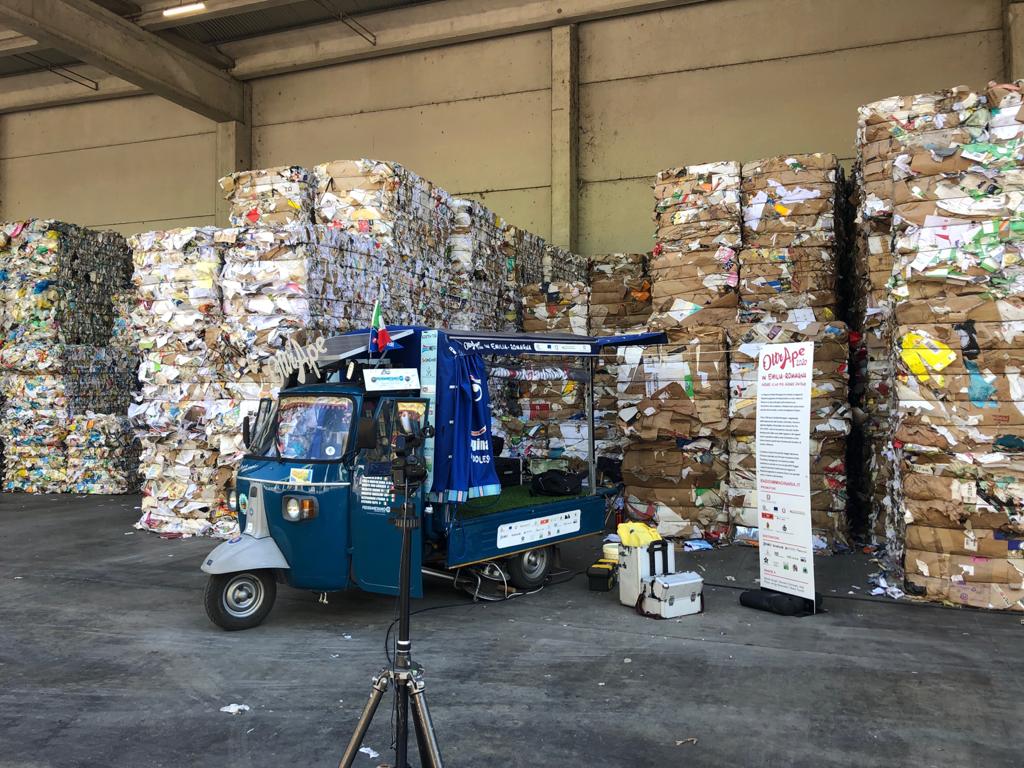 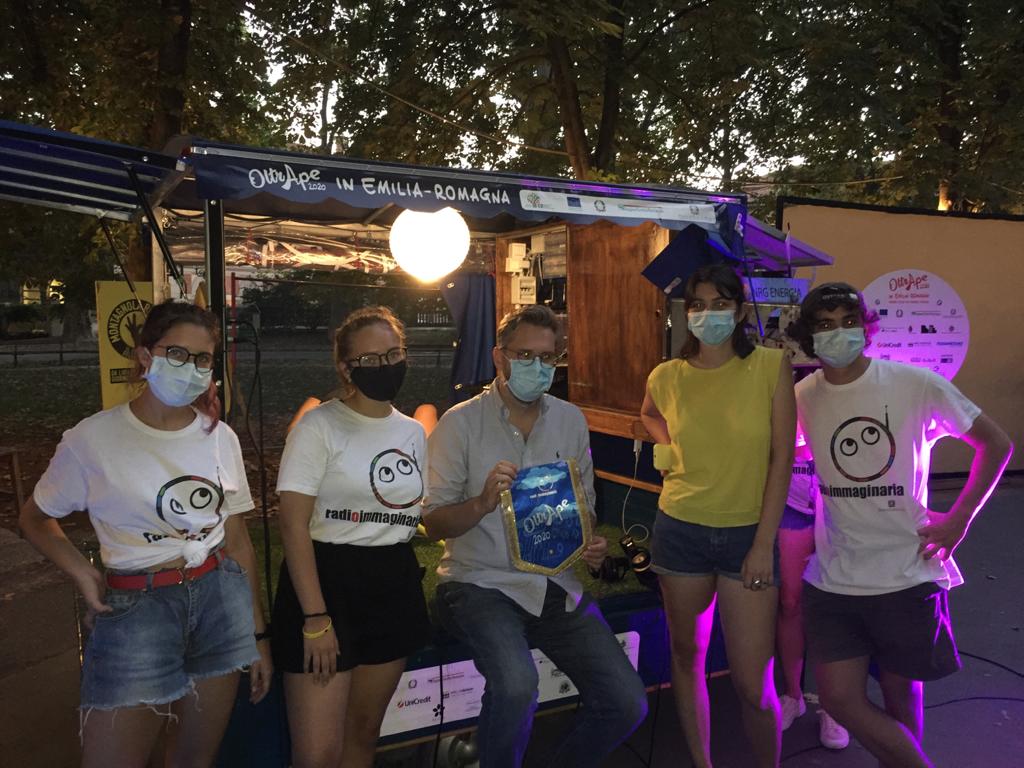 19th AUGUST 2020, STOP 29
Hey guys! This is the 29th stop of OltrApe 2020 and today we went to Finale Emilia, a small town which you probably know because of the earthquake in Emilia in 2012. I've never been to Finale before and I have to say that when you arrive there vibes aren't that good. In fact after 8 years many houses are surrounded by scaffoldings and people still can't live there. We parked our Ape in front of the ex city hall , which is also to be reconstructed.

After Tg we managed to interview the mayor Sandro Palazzi and to give him our pennant, which he immediately hung in his office. The weird this that we all thought about was that the way those teenagers felt during 2012 must have been like we feel now because of Covid. Both of these horrible things made us stay home not going to school and in one way or the other they rearranged our lives. As you know, we can't stay still and after that we immediately drove towards Sassk Marconi. We stopped to add Biomethan (our Ape works like that, it's super ecologic) and then we headed to our next destination. Tomorrow will be pretty intense: We'll stop at Sasso Marconi's Marconi's Foundation and then in Bologna at Montagnola Park. Here we'll present our book "Noi abbiamo un futuro" which is the story of OltrApe 2019 and the whole Radioimmaginaria. See you tomorrow!