11th of AUGUST 2020, 21ST STOPToday we stopped in Roncole Verdi, near Busseto and Parma. Roncole Verdi is a particular name, verdi in italian means green. So is it green for the trees? For the fields? No! The name is Roncole Verdi because here, more than 200 years ago, Giuseppe Verdi was born. He's one of the most important composers in the history of music. Just think that right here, in a church that seems so small from the outside, Verdi learnt to play the harmonium.

Well, Busseto and all the towns around here are called terre verdiane, everything is dedicated to Verdi! Verdi streets, Verdi squares...the Busseto theatre is dedicated to Mozart instead. Not true! It's for Verdi too! Anyway, today was particularly full of culture, but we promise that we'll be more loose from tomorrow. I'm basically sleeping, I's only my second day and I feel like I've been here for a month now. I'LL GO.

Marco at the wheel

10th of AUGUST 2020, 20TH STOPHey guys! This is my second logbook and today we've been in Castell'Arquato. It's a medieval town, very nice, but there was a lot of sun. It was so hot we wished to die. But it was really fun because we talked with some people our age who told us what is there to do in this town together with the municipal councillor Filippo Eleuteri. He told us he wishes to create more aggregation in the city centre.

Tonight we're meeting some guys we met yesterday in Bobbio who are actually from Piacenza. They organised a camping where they all sleep, with a nice bonfire, a screen where to watch a movie and we're going there to eat pizza all together. We can't stay to sleep there as well but we're going anyway because tonight's the last night for Gio, Filippo and Mattia. They begun their trip with me, but I'm staying a bit longer than them. I will miss them a bit (I hope they never read this because I have a reputation to maintain).

We have to go now! Goodnight!

9th of AUGUST 2020, 19TH STOPWith our Aperadio we reached the further west stop of Oltrape: Bobbio. I didn't know this town before today, but after they told me we're almost at the border with the Liguria region (my region) I got pretty affectionate. Besides this, I am always amazed by the warm welcome we receive everywhere! Bobbio is a great place!

We found a lot of teenagers like us! Some of them go to school in Piacenza and we met some guys that realised a really cool project after a painting by Klimt was found in the city. After years of not knowing where it was it suddenly came up in a hatch of the garden of the Ricci Oddi museum in Piacenza! And that's where the paintings of the teens who adhered to the project realised.

Coming back to Bobbio, despite it not being so big, it's full of charm, mainly because of the castle (Castello Malaspina dal Verme) and the bridge (Ponte Gobbo) that is built on the Trebbia river and unites the two sides of the city. Right under this bridge there's a lot of people having a bath in the Trebbia, and we're between those people. I'll leave you know to have a little bath. Tomorrow we'll be in Castell'Arquato and we'll also be at the exact half of the trip. See you tomorrow!

Filo at the wheel

8 AGOSTO 2020, TAPPA 18Oltrape 2020, 18th stop. We arrived yesterday in Reggio Emilia and after sleeping in an hostel we immediately got out and met some guys from a youth center. They did a lot of things, like buying and selling used school books. After we had the occasion to talk to a municipal councillor who let us visit the room where ages ago our three coloured flag was created. 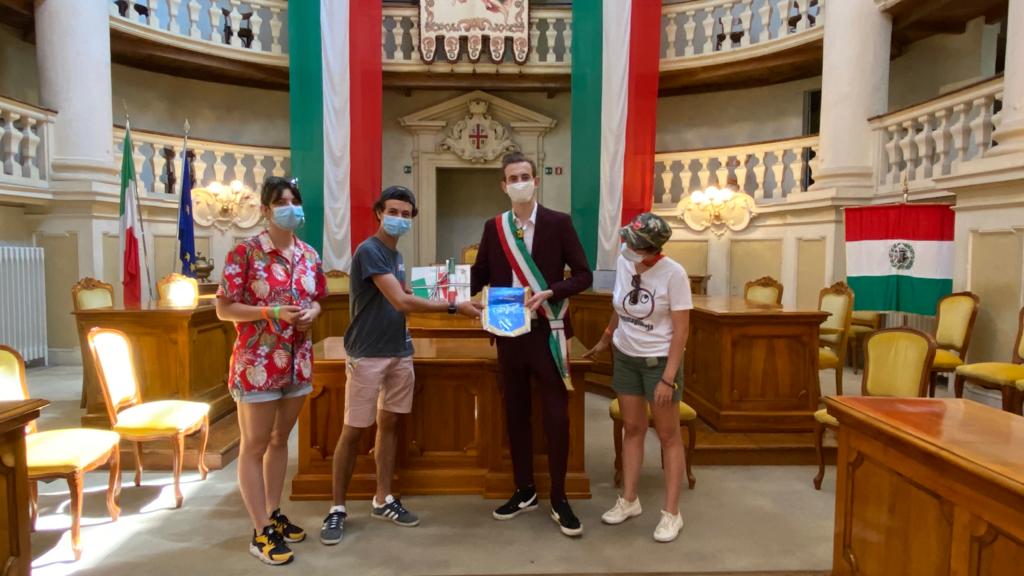 After we recorded our episode we left for Bobbio, near Piacenza. Our Rimufo grew fond of Reggio Emilia though, and she decided that at least the muffler had to remain there. After a bit of wire and patience we were on the road again. It was a pretty intense day and I'm tired. Let's update tomorrow.

Gio at the wheel

7th of AUGUST 2020, 17th STOPHey everyone! It's Matt from Castel Guelfo and this is my third day of Oltrape. This morning we woke up in the Rione Giallo in Faenza. That's right, Faenza is divided in 5 factions and every one of them has a team of flag wavers. At 10am (I was still half asleep thanks to the pots and pans wake up call) 2 flag wavers tried to teach me and Filippo how to wave flags. The results were poor and the risk of breaking some windows was high. 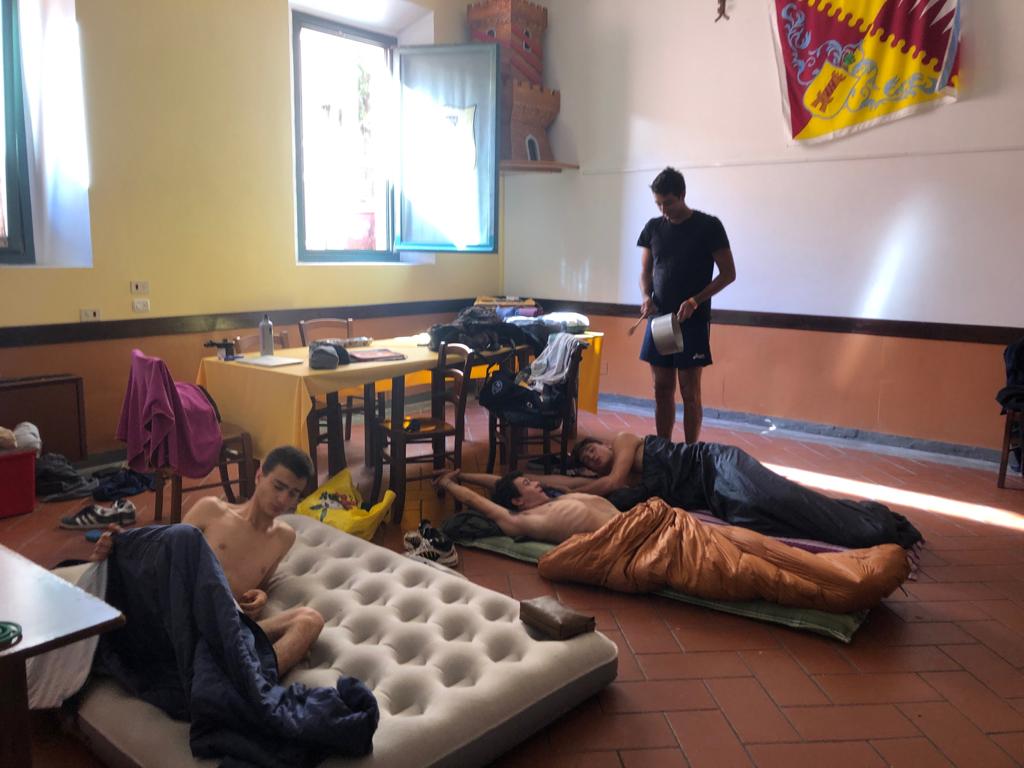 We are now going to Reggio Emilia for the night. Today our Ape had her first supply of bio methane at the gas stop of Spilamberto, near Modena!

We decided to converto our engine to methane this year, so we're more green than ever. That's all for today, see you tomorrow!
Mattia at the wheel

6th of AUGUST 2020, 16TH STOPHello everyone! I'm Filippo and today I will tell you all about this Oltrape stop. We've been in Santarcangelo di Romagna for the day. It was the last destination in the Riviera Romagnola. In Santarcangelo the screenplay writer Tonino Guerra was born, he was the right arm to Federico Fellini. Screenplay writer is a bit reductive to what he was, because he also was a writer, a poet, a painter, a sculptor, an architect and many more. That's why people who live in Santarcangelo decided to open a museum for him inside the narrow streets of the town. Another fantastic experience we did today was to enter in the underground city. You got it right, a great labyrinth in the stone under Santarcangelo di Romagna. In the rocks you can get lost in alleys called "Grotte tufacee". This place is 6km long and the temperature goes between 12°C and14°C. I don't want to bore you with some historical facts, but these places were a safe place for all the citizens of the town throughout all ages.

We just got in Faenza, another great city in medieval style. We were welcomed in the best way possible, and, being from Sanremo, I am enjoying all of it. I have to leave you now, because there's a plate of pasta waiting for me at the table and we are in the company of our new friends from Faenza. See you at the next stop!

Filippo at the wheel

5ht of AUGUST 2020, 15th STOPHey guys! Luvi here. Today is my first day of Oltrape and it started off brilliantly for me! Yesterday they brought us into the Misano Circuit and they let us do 2 laps with our Aperadio! A dream. Today is another day though, and the stop was in Cattolica. We have spent the entire day inside of the Acquario di Cattolica and they also planned a visit for us!

I always asked myself why it's always dark inside of aquariums, but I know why now. They basically use artificial light to recreate the night/day rhythm for the fishes, and they also recreate the sea streams to ensure the animals live in the best way possible. Antonella Bianchi, responsible for the communication of the aquarium told us all this We then spoke to three girls from Rosso Ideale, an association from Cattolica that organises cultural actives and it's all made but teens of our age! The mayor of Cattolica, Mariano Gennari, explained to us how they managed the pandemic in the city and how important it is to be united in these situations. It's a bit of a metaphor of the trip actually, we have to keep going even if the first fights are taking place. We've got to go to dinner now, tomorrow we'll be in Santarcangelo di Romagna, see you! 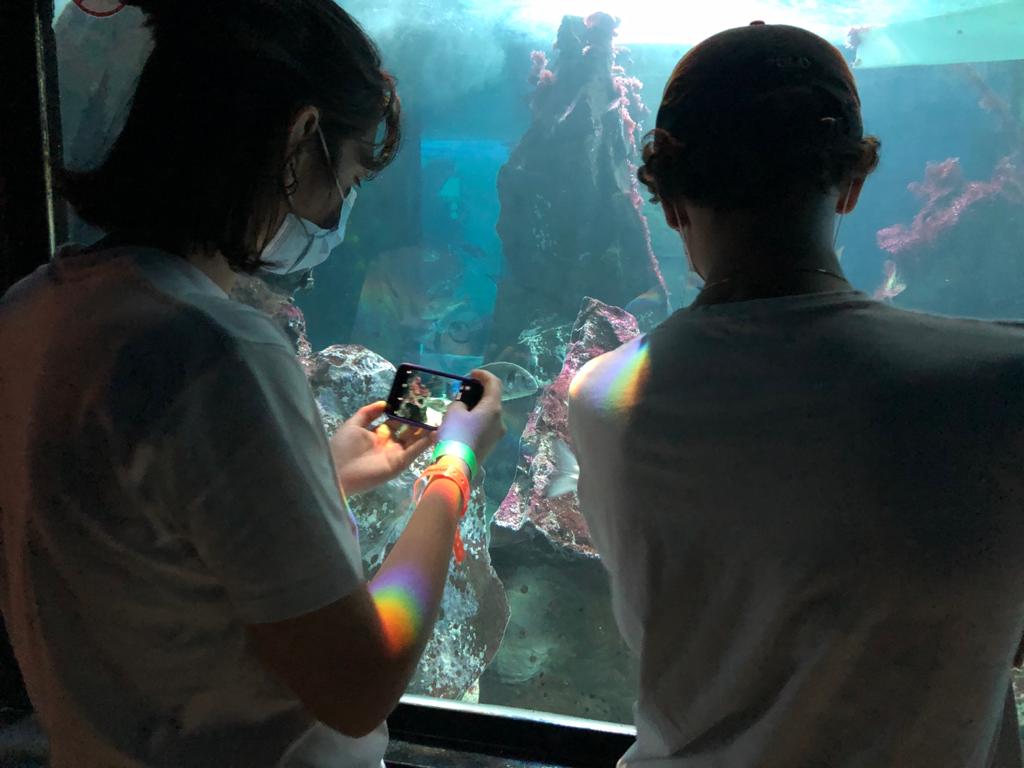