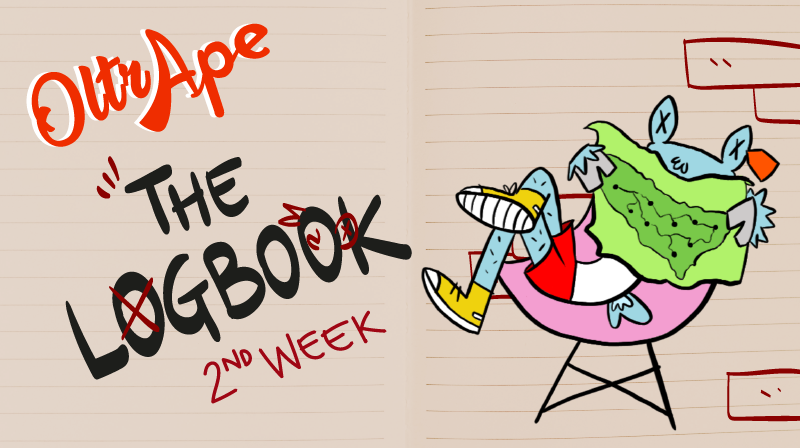 4th of AUGUST 2020, 14th STOPI write this article with a heavy heart. The second week of Oltrape has gone and the second crew, France from Cremona and Andrea from Torino, have left. Mattia, Giovanni and Filippo have arrived hyped as ever to begin this new adventure. It's always a bit sad when a group leaves, but today was definitely a day to remember. It started badly, but it was full of surprises.

We were ready this morning, with our ApeCar clean and full of methane, to make a few laps at the Misano Circuit. But when we arrived not only a storm was ready to hit us, but also the crew of Summertime (the tv series) was occupying the track to shoot. So we had to leave, shame for France and Luvi who were thriving to drive inside the circuit!

Then we arrived in Misano Adriatico and we just had the time to set the ApeCar and record our service for the news that it started raining like hell. Rain, hail, thunders, the sea was of different shades of blue. Terrible and beautiful at the same time. Thing started to get better then. We gave our flag to the mayor of Misano Adriatico, Fabrizio Piccioni and then we had a big surprise. Benny Benassy, a super famous Aemilian DJ and producer, came and said hi to us! He worked with so many artists like Madonna, Skrillex, Mika and many others. It was so cool! The day definitely got better.

The most epic thing happened in the Misano Circuit! They called us right after it had stopped raining and they brought us into the track. You will se a video of the laps we made in some time, in the meantime a picture of Finn is enough.

This Oltrape is going really well and I'm happy we still have 26 days to go... see you tomorrow!
Giu at the wheel

3rd of AUGUST 2020, 13TH STOPHey guys! Sassa here. I'm trying to free our tents from the water... Today we have been to the Publiphono, I don't know if you ever happened to get lost on the beach of the Riviera Romagnola, but every time someone loses a child they manage to find them. They run the speakers of all the Riviera.

We also have been to Oltremare, in Riccione, last time I was there I was 5 year old...

We watched a raptors show and also a dolphins one and they are way more coordinated than me (it doesn't take much to be honest). Claudia Paoletti, a biologist of the park, told us about a project they are running to save griffins and other endangered species. We also met Le Lische, a band from Reggio Emilia, they recently released their new song "Non siamo stati mai" and we got the chance to ask them about online classes and how they'd like to go back to school in September!
I'm getting hungry now and I have to go to dinner before all the food is gone, see you tomorrow!

Sassa at the wheel

2nd of AUGUST 2020, ANDRE AT THE WHEELHey guys, it's always Andre from Turin here...Today it's the twelfth day of Oltrape, we were in Montefiore Conca, it really was a challenge for our ApeRadio. We had to face some hard slopes...

After lunch me and Sassa challenged each other in creating an object in the clay with the theme being "travelling"... At night me and Avvo visited the beaches of Riccione, where we collected the opinions of a lot of teens regarding online classes etc..

Andre at the wheel

1st of AUGUST 2020, ELEVENTH STOPToday the stop was at Verucchio.
"Don't worry guys it's not too much uphill"
1 hour later: almost finished our fuel and a 20% slope. Luckily enough, whoever goes slowly goes far and we managed to get to the square where we had to make our service on the news. On time as always.

Verucchio is very special: a nice little town that reminds a lot of medieval scenarios. It's weird to think about how our peers can spend the time in these hidden places, but somehow they do. And they are so chilled that they told us they would like to keep doing online classes until September. I get them a lot, September is so near!

After the visit to the Rocca Malatestiana we got on the road again and once we finished every drop of fuel we stopped to refill the mehtane, or should i say BIOMETHANE!
Not even the gas man wanted to believe it but he eventually gave up and he even wanted to get up on the ApeCar and drive it. Tomorrow we'll try to understand which kind of school is better to do. For now let's get in our sleeping bags, goodnight!
Charlie at the wheel.

31st of JULY 2020, TENTH STOP"Mucca to Rimuflo - did you see the Apecar? Over"
"Rimuflo to Mucca - guys, Ludo is driving. We'll arrive in Rimini tonight"
"Ape to Rimuflo and Mucca - Stop it! We're almost there. Rimulfo wait for me because I don't remember the route"

That's how the morning started. Finally, after a few days, we remembered to charge our radios and this was the result. I'll tell you all about the tenth day of Oltrape. It's not my first expedition because I was part of the crew who went to Stockholm with the Ape. 5000km around Europe, but this is a story for another time.

We changed the third camping today and despite the heat we managed to complete everything we planned: the news service and the live episode.

We were hosted by a nice place right above the Ponte dei Mille in Rimini called GraDella: just think that every sandwich was named after a friend of the owner, Tommaso. It's a kind of tribute he wanted to do to his fellowship... I thought it was a really nice gesture. 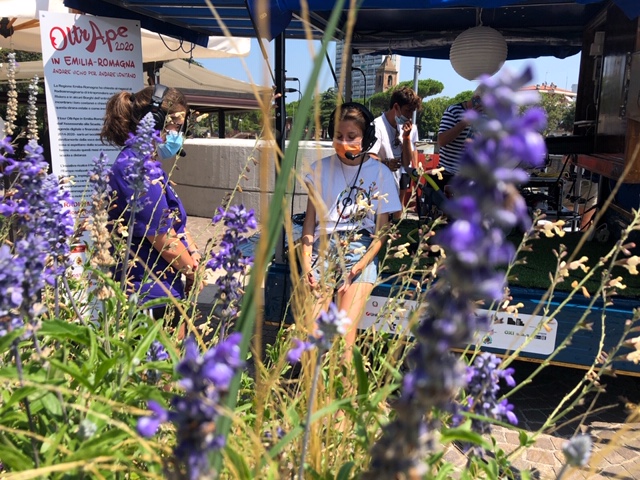 Besides this romanic episodes, today we talked with Stefano Versari, the Director of the Regional School office. There's a lot of news on how the school will be in September, on newspapers and websites and it's difficult to understand.

Thank god Stefano explained to us that in September we'll physically get back to school and all the news we read about online classes, classes in turns etc are just some precautional measures we'll take if we're in a lockdown again. It wasn't so clear to us...

It's really hot these days and to move with the Apecar, do radio under the sun, search for guys our age is very challenging and every night we're so tired but happy we gave it our best. So tonight we rewarded ourselves with a bath in the sea. We'll be in Verucchio tomorrow, so we'll go up a bit. Let's pray it's a bit cooler!

Giu at the wheel 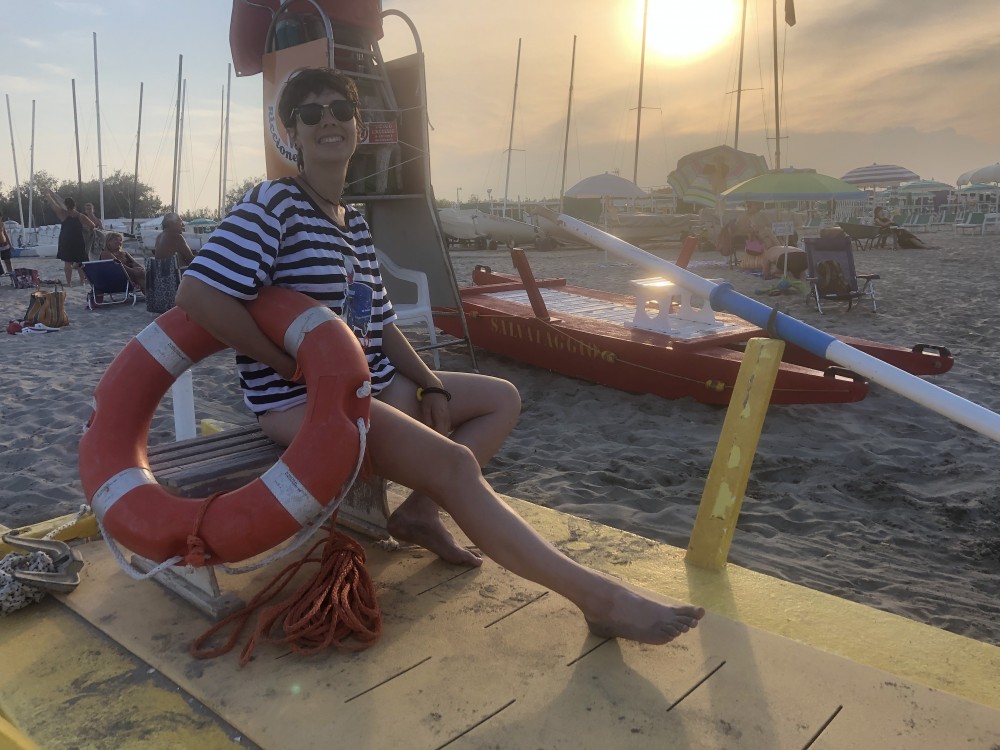 30th of JULY 2020, NINTH STOPHello, Andre from Turin here. My second day in Oltrape started off with a nice waking up at 7AM in the morning... After dismantling the camp we had a coffee and we left for Bellaria Igea Marina. Here we met the Head of Culture Michele Neri and we asked him something about online classes. At lunch time it was so hot so I hid in the ApeRadio I tried to enjoy the small shadow there was... 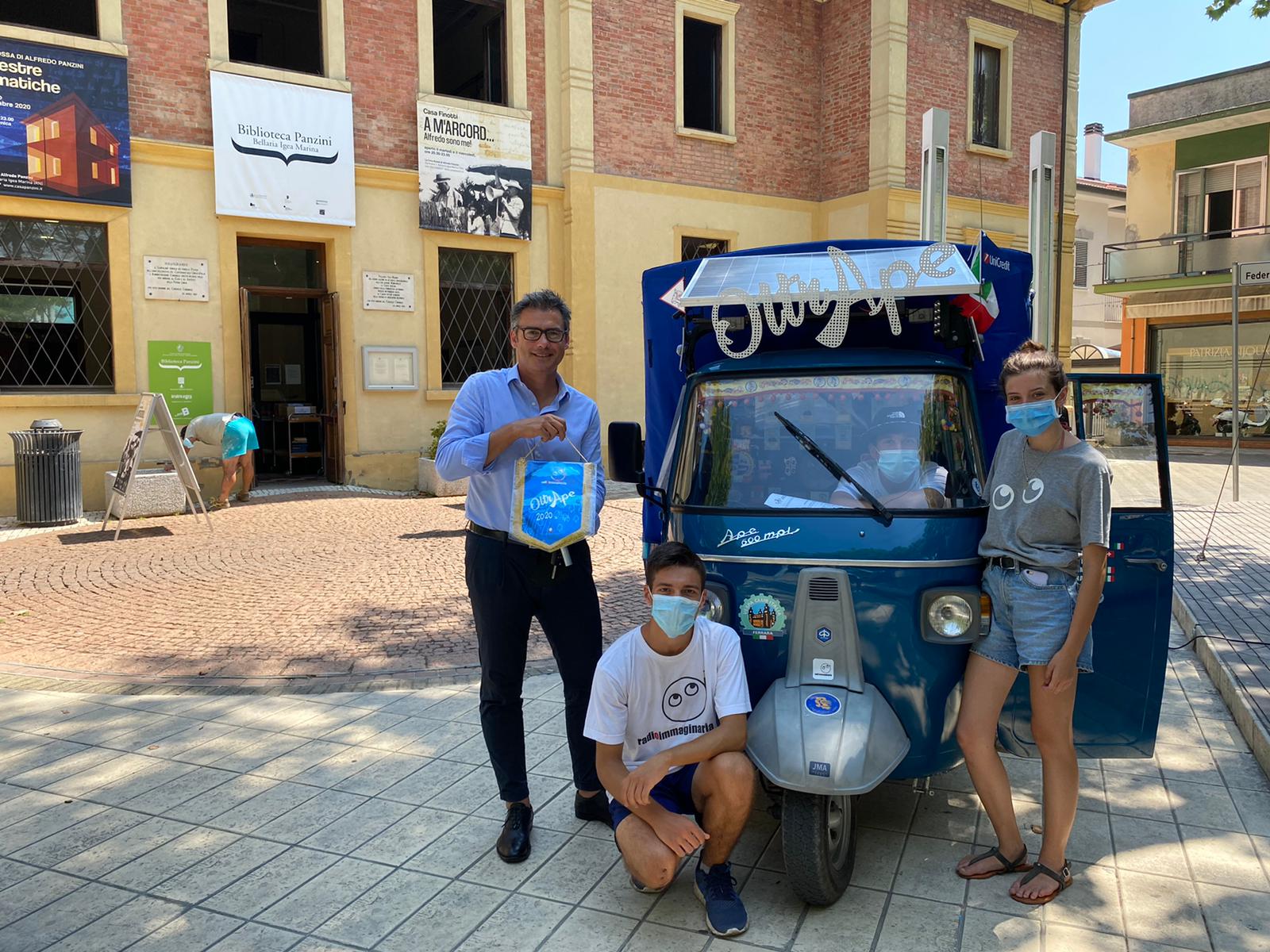 After we were done with the live program at 15 we ate a delicious ice cream, paid for by Robi of Lollipop. Then we visited the Torre Saracena, hosting the seashells museum. But the cherry on top was the exit with the "Teresina" a Bragozzo from 70 years ago, but I can assure you it's a unique experience. When we got back to the port we jumped on the RiMuflo and we left for Riccione... Well, it's time to go now, plus I had a hell of a day and I'm about to collape, see you tomorrow!

Andre at the wheel

29th of JULY 2020, EIGHTH STOPHey guys! I'm France from Cremona and I arrived today together with Andrea from Turin. We changed crews yesterday in Bertinoro! We had our first impressions yesterday and the first trips with our ApeCar to get to the campings. I was smiling like a child, even if it didn't show because of the mask, since I am very passionate about cars and stuff. Once we got to the camping you'd think the night is over, but no way. Me and Andrea showed off our abilities at assembling a tent. He didn't know where to start, I was going blind, you couldn't say which was the worse of the two. The important this is that it stands, no? 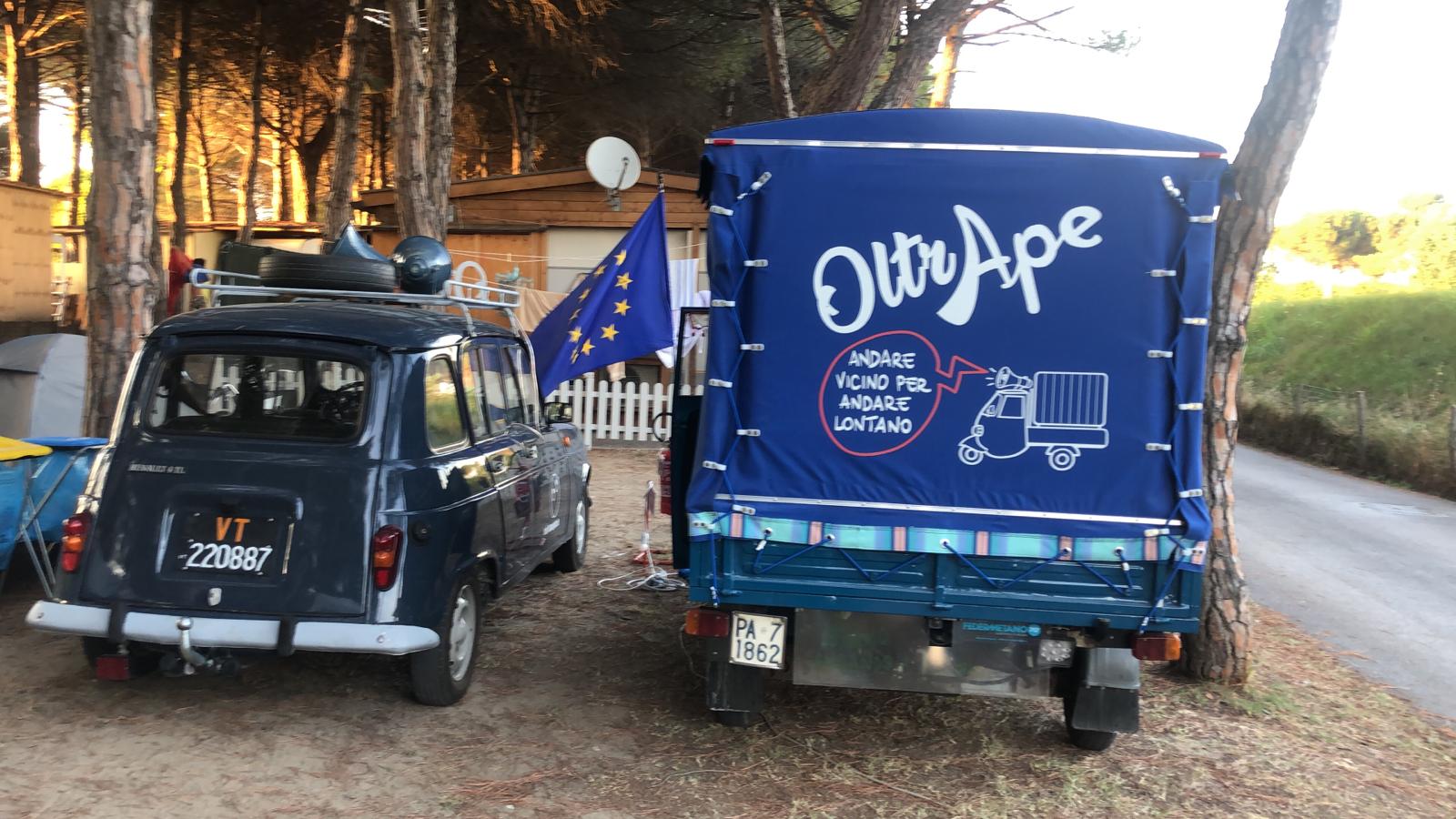 Today we had a lot of plan changes, so the day was a bit troubled. To sum it up: we stopped in front of Villa Torlonia for the news service. Then we rushed to San Mauro Pascoli to go live in a park and we really didn't hope to manage but in the end we did it, and a nice episode come out. Then we relaxed a bit and we visited the places where Giovanni Pascoli lived. It was pretty intense and who knows what's waiting for us in Bellaria Igea Marina tomorrow... we'll let you know!