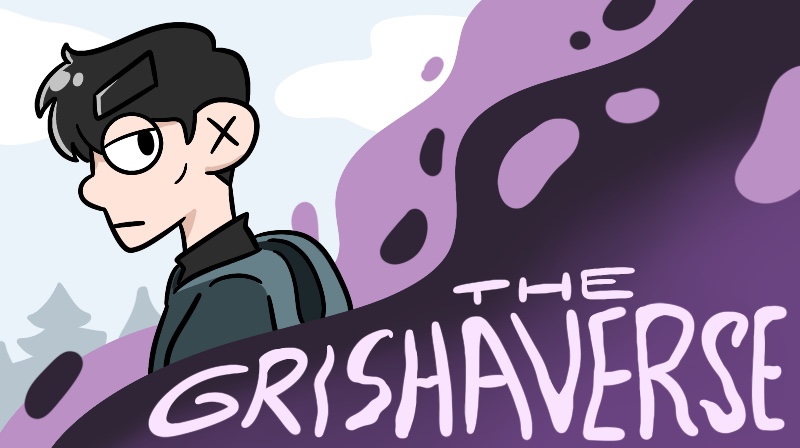 Hello nerdy and non-nerdy friends! My name is Sofia and I love the Grishaverse!

Wait, what? You don't know what the Grishaverse is? Well, good thing I'm here to explain it to you! And if you already know what it is, well, you can still fangirl with me as I explain!

So, the Grishaverse is the name of a universe made up by a series of books (a trilogy and two duologies, plus two special books) and a tv series which is going to have a second season! The tv series is called "Shadow and Bone" and you can find it on Netflix!

But let's start from the beginning. This universe gets its name from the Grisha, which are people who have special powers. They're divided in 3 orders:


1- the Corporalki (the order of the living and the dead)

Made up by Healers (pretty self-explanatory) and Heartrenders, who can manipulate the human body controlling blood flow and pressure and things like that.


2- the Etherealki (the order of summoners)

They have Squallers, who can manipulate the air, Inferni, same thing but with fire, and Tidemakers, same but with water.

They are Durasts, who can manipulate anything solid and Alkemi, who specialize in chemicals.

Now, the first books in this universe are the "Shadow and Bone" trilogy. They tell the story of Alina Starkov; an orphan who discovers she's the Sunsummoner. She can summon light and this means she's the only one who can destroy the Fold; a part of land that looks and feels as if darkness was a place. It's full of monsters called volcra, who are repulsed by light and fire. It divides the country of Ravka in two and in order to go to the other side you have to cross it and, well, it's not a pleasant experience. Many people die during the crossings.

It was created by a Darkling; a special Grisha who can manipulate darkness. There can be only one at a time and the current one is General Kirigan. He and Alina are the key to destroying the Fold. Alina has trouble adjusting to her new life as the Sunsummoner. She finds a friend and, well, many things happen. The trilogy is Alina's story and is narrated by her in first person.

Then we have the "Six of Crows" duology (my personal favourite). It takes place some years after the events of the third book of the trilogy in Ketterdam; Kerch's capital (Kerch is another country in the Grishaverse). Kaz Brekker is a seventeen-year-old thief with a gift for unlikely escapes. One day a rich merchant asks him to accomplish an impossible heist, which consists in stealing back a prisoner from the impenetrable Ice Court.


Kaz knows he can't do that alone, so he recruits five other people with special talents and abilities to help him. A convict with a thirst for revenge, a sharpshooter who can't run away from a wager, a runaway with a privileged past, a spy known as the Wraith and a Heartrender using her magic to survive the slums. Will they succeed? This duology is told by the POVs of the six main characters, but in third person.

The last duology is "King of Scars" and it follows Nikolai Lantsov, Zoya Nazyalensky and Nina Zenik and, well... I can't say anything else, cause it'd be spoiler after spoiler. As for the two special books, they are a collection of fairy tales from the different countries of the Grishaverse and a book with the stories of the saints of this universe.

So there you have it! Now you know what the Grishaverse! If you want to get into it, I suggest you start with the book "Shadow and Bone" by Leigh Bardugo. And, just a heads up, the tv series does follow the first book, but it also contains some characters from the Six of Crows duology.

That's all folks! Until next time!
Byeee.
books
fantasy
grisha
grishaverse
nerd
netflix
shadowandbone
sixofcrows
tvseries
Did you like it? Share it!