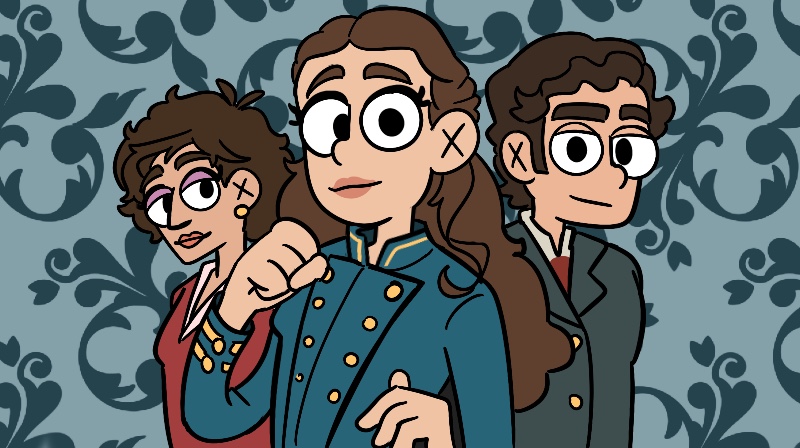 Before getting into the review (which is going to have spoilers, I warn you) I have to say that I'm a big fan of the Enola Holmes books. So, I have to say the usual thing: the books were better. Or, well, they were almost completely different. I mean, the film isn't Percy-Jackson-movie-adaptations bad, but, if you've read the books like me, you need to keep in mind that it's not the same story.

I'll start with the things I didn't like, not only as a fan of the books, but as a pretty logical person.

FIRST OF ALL why would a fugitive who succeeded in eluding the great detective Sherlock Holmes TWICE put her OWN NAME on the window of her shop? In the books, where she's far more intelligent than in the movie despite being two years younger, she uses a pseudonym both for her, who poses as a secretary and for her ficticios employer, who's a man, so that she's taken seriously (which is sad, I know, but we're in the late 1800s).

SECONDLY, that Tewksbury guy. The Marques. Well, after the first book, he disappears and comes back for an adventure in the seventh one. Enola is an independent woman who needs no man and seeing her pining like this at the beginning of the movie doesn't feel right. Even though she's still herself when dealing with him and is still independent on some level. And I have to say it, they're really really really cute together. So it's fine by me that they're together.

Sherlock and Enola's friendship and collaboration is so cute. I love seeing them work together, even though, well, he's supposed to be trying to find her to send her away to become a proper lady, but, well, it's better this way. If Mycroft were there, it would've been different, so we're lucky he wasn't.

The detective vibessss. I love Sherlock Holmes-esque films and tv shows, so I enjoyed all of it. I'm a sucker for all the deductions and explanations of the case.

As for Moriarty, I found it very clever that it was a woman using the power of being underestimated. Plus, the name was an anagram! I love anagrams!

So this is all folks! Let me know if you liked Enola Holmes 2 with an email to [email protected] or with a DM to the Instagram page @onair_radioimmaginaria!