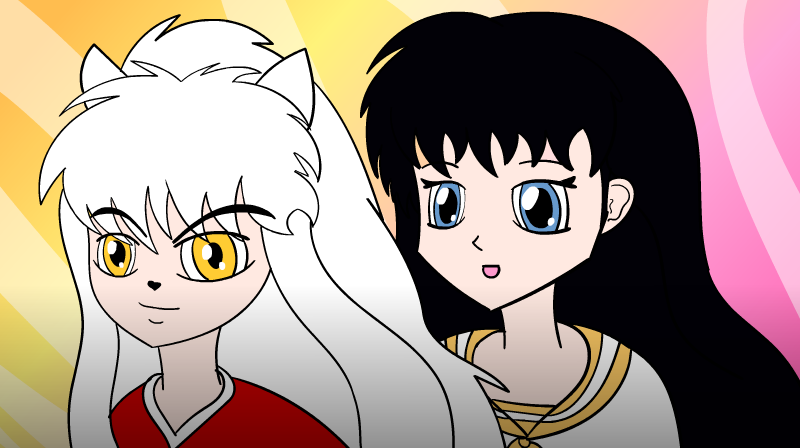 Hey guys I'm back! This week I'll tell you about one of my favorite anime/manga: Inuyasha. Let's get into it.

Inuyasha is a Japanese manga series written and illustrated by Rumiko Takahashi. The series begins with Kagome Higurashi, a fifteen-year-old middle school girl from modern-day Tokyo, who is transported to the Sengoku period after falling into a well in her family shrine, where she meets the half-dog demon, half-human Inuyasha.

In that time there are demons who are looking for a powerful jewel that can make each demon stronger and can give great power to humans but it also corrupts them. Then the sacred Shikon Jewel re-emerges from deep inside Kagome's body and she accidentally shatters it into dozens of fragments that scatter across Japan.

Inuyasha and Kagome set out to recover the Jewel's fragments, and through their quest they are joined by the lecherous monk Miroku, the demon slayer Sango, and the fox demon Shippo. Together, they journey to restore the Shikon Jewel before it falls into the hands of the evil half-demon Naraku.

In contrast to the typically comedic nature of much of Takahashi's previous work, Inuyasha deals with a darker and more serious subject matter, using the setting of the Sengoku period to easily display the violent content while still retaining some comedic elements. The manga was adapted into two anime television series by Sunrise. There are 7 seasons of the anime, 4 films and a sequel with the children of our beloved characters and the sequel is called "Princess Half-Demon".

Coming back to our characters, in modern-day Tokyo, Kagome Higurashi lives on the grounds of her family's Shinto shrine with her mother, grandfather, and younger brother. Then there's Inuyasha; he is a demon that was originally defeated fifty years prior by Kikyo, a warrior priestess who was the previous keeper of the Shikon Jewel and in the first episode Kagome is revealed to be the reincarnation of the now-dead Kikyo. The Shikon Jewel was burned along with Kikyo's body to cast it out of this world entirely, in order to keep it safe from the hands of those who would use its power for evil.

So when Kagome and Inuyasha begin their journey one of the first people they meet is Inuyasha's half and older brother Sesshomaru (who is accompanied by a human girl named Rin and a little water demon called Jaken) and they both want the sword that their father left behind (their father was a powerful demon dog).

In the end Inuyasha gains his father's sword Tessaiga. When Kagome and Inuyasha are collecting the shards and dealing with the threats they come across they are joined by Shippo, a young fox demon. Kikyo is later revived and revealed to have been Inuyasha's lover, but her version of how their falling out occurred brings the events into question.

It is when the group is joined by monk Miroku, whose hand is cursed with a Wind Tunnel that was passed on to him from his grandfather, that they learn that his family's curse and the events which resulted in Inuyasha's imprisonment and Kikyo's death were all caused by the spider half-demon Naraku. Naraku comes into possession of most of the shards while absorbing demons to increase his power and remove any weaknesses.

Inuyasha's group is soon after joined by the demon slayer Sango and her two-tailed demon cat Kirara. Sango's entire clan was killed when they were tricked by Naraku and her younger brother Kohaku fell under his control. Then there is Koga, the leader of the eastern wolf demon tribe who seeks to avenge many of his comrades' deaths at the hands of Naraku.

Many other things happen and much more drama and I think it's worth watching or reading because it's very catching and also entertaining.