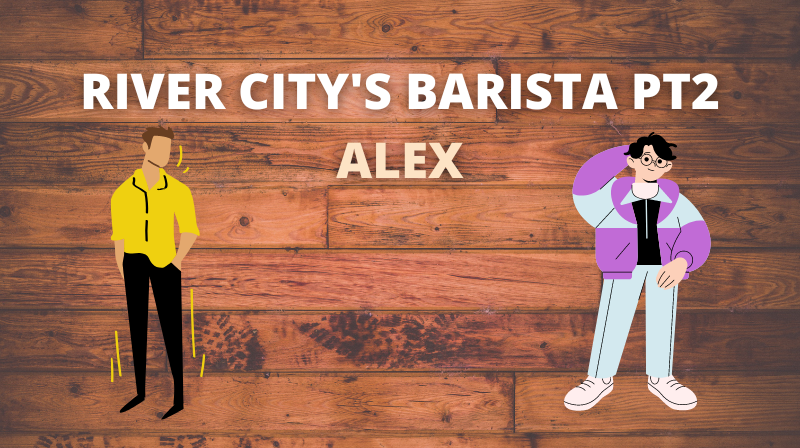 Hey everyone! You're reading the second part of "River City's barista"; a five-part story about life in River City's bar. If you want to read the first part, click here! Now let's start part two!

It was just Tuesday when a new person arrived at River City's bar. He was a young asian man with short black hair and a really cool purple bomber jacket.
When he approached the counter Mike couldn't help himself and complimented him on the jacket.

"Thanks man, I think I'm in my Speak Now era. I just got this 13 tattoo on my hand." he showed him the side of his index finger, with a little 13 tattooed in purple ink.

"No way! Another Taylor Swift fan! You're the second one I'm meeting this week. It gives me new hope for the new generation." beamed Mike.

"Another swiftie? Wow! Is he handsome?" he winked.

"Oh, well, I'm sure we could become friends. She'd be my first one here, or, well, second, if you want to be the first." the guy scratched the back of his neck, clearly uncomfortable.

"Sure! But would we really be your first friends? You don't seem like a loner, maybe you have some people who are actually your friends, but you never thought about them as such." the guy started laughing.

"Aw, thank you so much man, but I said you are my first friend here. As in, I just moved here yesterday." Mike didn't really know what to say.

"Er... well, my bad. By the way, you'll see your new friend here on Monday, she'll start working here at the café."

"So cool!" he said. "Can I get a high five?" he outstretched his hand and Mike hesitated a moment before high fiving it. He was a weird guy, but he seemed fun and sociable. He'd be good for Jane.

The guy started walking away, but then he stopped and came back.

"Sorry, I forgot to order. Aaand, to introduce myself. I'm Alex." Mike laughed.