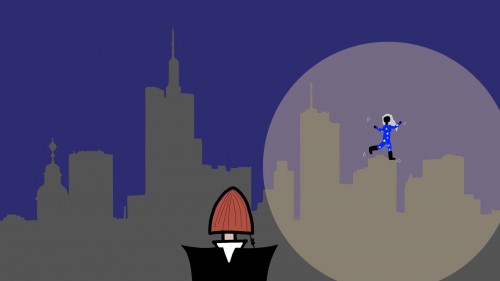 Tara used Pauline's badge to open the cage and she took away the tape from Stella's mouth.

"Well, I'm happy to see you too." Tara hugged her.

"You saved me, Tara. That was extremely dangerous, but also brave. You're my superhero."

"Well, I haven't really been a hero, more like a spy. Can my code name be Superspy?"

"If we get out of here alive I'll call you whatever you want." Superstar lifted Pauline Alika. "Let's go"

They arrived at a window and Stella smashed it. An alarm rang. They heard footsteps approaching.

"I... I can't take you both down at once." murmured Superstar. Tara looked down. They were way too high up, she couldn't just jump. And they couldn't leave Pauline, she had recognized Tara, who had also given her name to the journalist for the internship. They knew where to find her. They knew she was Superstar's friend.

"This is the end." Tara had lost all hope.

She looked down another time and sighed. She wouldn't jump. She couldn't. And she knew what was more important.

"Take Pauline with you. Give her to your spy association, put her in prison, somewhere where she won't be revealing your identity." She told her friend. Superstar looked like she was sick. She had been starved for three days and was very weak. She had to get out of there.

"Don't... don't worry. I think I have a plan, but there's no time to explain. Now go! But first punch me with your lights."

"A fake punch, if you want. Just do it quick, then fly away!" the guards were coming. They would have been there any second.

Stella did it. She shoved Tara aside, flashing a harmless light at her. She made a show of falling down and screaming. Superstar flew away as the guards arrived. Tara closed her eyes.

Tara heard voices all around her. The guards had arrived too late and had only found her, the little internship girl who had been struck by Superstar. That could've been a terrible case for the "Ticy Post" and the spy association it covered. Tara was pretending she had fainted, but she wanted to laugh.

Somebody took her in their arms and carried her somewhere. She didn't dare open her eyes until she was put down on what seemed like a bed. She pretended like she had just woken up and tried to look startled. She had been brought to an entirely white bedroom that felt like a hospital's one. The woman who had explained her the job was sitting next to the bed and looked very worried.

"Tara uhm... Williams, dear, how are you feeling?" she asked when she saw she was awake. "Do you remember anything, sweetie?" she was trying to understand what she had seen and if she had understood. After all, they had held prisoner a superhero.

"No, madam, I just remember a flashing light and..." she paused, trying to look desperate, and enjoying the terrified look on the woman's face. "Oh no! I had to bring a napkin to the journalist! I'm so sorry, madam, I spilled all the coffees on his desk. You probably want to fire me. And you'd be right. I'm not good enough even for an internship." She hung her head, looking as sad as ever.

"Aw, don't worry dear, everybody makes mistakes. You can keep working with us, today has just been an... well, not the best day for our company. But you are a wonderful girl and we'd be happy to have you with us. Just... don't tell you parents about that flashing light, okay? That was just a little problem we had today, but we'll eliminate it soon." 'Yeah, you wish' thought Tara, but she forced herself to look grateful.

"Thank you so much madam! You're the kindest person ever!" she jumped out of the bed. "I'll see you tomorrow!"

"Now you're really a spy!" exclaimed Stella. Tara had just received a badge from the good spy association, the one her friend worked with. She was going to keep her internship at the "Ticy Post", providing information for the good association.

"No, I'm not a spy." Said Tara. Stella stopped and turned toward her. Her eyes were wide, but before she could say anything Tara finished. "I'm Superspy!" she exclaimed. Her friend rolled her eyes and hugged her.