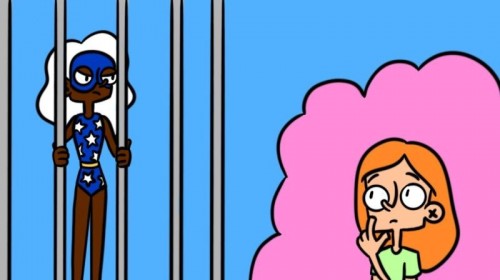 Tara breathed deeply. Her friend was in trouble, but she couldn't help her. She couldn't just charge toward two armed spies. She was safe, nobody knew Superstar's true identity and they didn't know there was somebody else working with her. Tara could have gone home, sleeping safely in her bed. But she wouldn't leave Stella alone. She had no superpowers. She had no experience. But she could surprise them and she would.

She had to let go of her friend for now, to gather information and make a plan. But she would have been back. She was Tara Williams, Superstar's ally, and she was going to save her best friend.

That night Tara had gone home, but she hadn't slept at all. She had opened a box she kept under a floorboard in her room and she had taken out a USB drive. It had a lot of information about Superstar. Stella had given it to her in case something happened to her. Well, now something had happened and Tara searched the files about the spy association that had kidnapped Stella. Well, Superstar. They still didn't know about her secret identity, otherwise they'd have already been knocking at Tara's door.

Tara found the association's address. They operated in a skyscraper in the city center, that everybody thought was a newspaper headquarter. The famous "Ticy Post". That was her target.

Tara smiled. She had obtained an internship at the "Ticy Post". It was her first day and Annika, the chief journalist, was explaining the job. It was mainly printing photocopies and bringing coffee to the employees, but that was exactly what Tara had hoped: the opportunity of roaming around the building, searching for Stella.

"Now you can go dear, you need to get everyone's coffee orders."

Tara went around the office taking the orders. When she arrived at a man's especially messy desk she knew that was her target.

Tara came back with a pile of cups. She approached the messy man's desk with and... ups, she spilled all of them on it.

"What the-" he started saying, then he paused seeing Tara's eyes full of tears.

"I-I... I'm so sorry sir!" she exclaimed. She took a napkin from her pocket and tried to clean up the mess, but it wasn't enough. "I'll go get something to clean this, I'm so sorry!" she said, running out of the room. She went up the stairs and then she stopped. She opened her napkin and smiled at the sight of the badge she'd stolen. The messy man's name was Sam Jones and he would help her save Stella without knowing it.

Tara put the badge on the scanner and the door opened. It was the third one she tried, but she was on the building's last floor and everything there looked like it belonged to a spy association, because, well, it did.

"Superstar!" she exclaimed. Her friend was still wearing the costume, but she was inside a glass cage. She had scotch tape on her mouth and she was skinnier than usual, but she seemed alright. She was awake. "I'm here to save you." she didn't know if there were cameras in the empty room, but she couldn't risk putting Stella's identity in danger.

Her friend seemed relieved, but then she opened her eyes wide and she started screaming.

Tara heard a sound behind her and turned, punching something. It was Pauline Alika! She fell to the ground and closed her eyes.

"Okay, let's get out of here." said Tara. She realized Pauline had seen her and would tell everyone about her. "And let's bring her too."