Superstar pt2: The truth about Superstar
Published by Sofia A. on 2022-05-06 in Detective 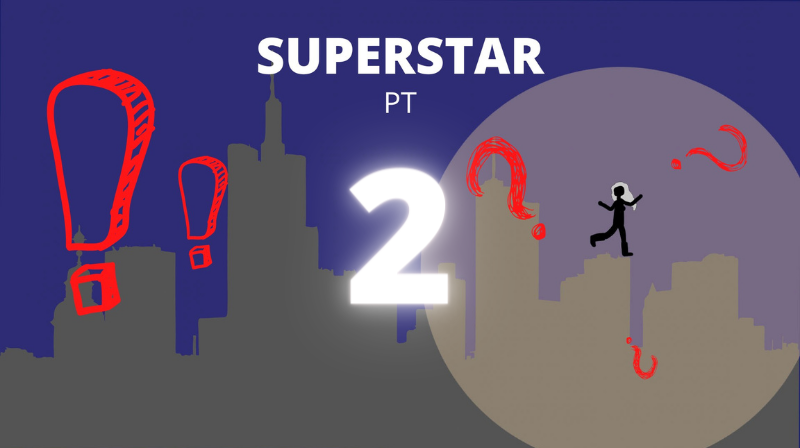 Hey guys! This is the second part of "Superstar"; a story about a superhero. If you haven't read part one yet, you can do it by clicking here. Now let's start part two!

Stella and Tara were sitting on a bench in a park, eating sandwiches. The sun shone bright and an old lady was knitting something on a bench.

Two men dressed in black suits came out of a bush. They ran toward the woman. One grabbed her purse, the other grabbed her, pointing a gun at her head.

Stella's sandwich fell to the ground as she stood up. "I'll go get help." she said and ran away. Tara set down her sandwich. The two men were far; they hadn't seen Stella run away and they weren't going to see Tara go after her.

She ran, keeping her eyes focused on her friend's curly black hair bouncing on her shoulders. Stella stopped and hid behind a big oak. Tara hid so that she could see her, but not be seen.

Stella had raised her left arm, where she wore a bracelet. It was a gold circle, with a star as its clasp. She touched it and her entire body lighted up. When the blinding light disappeared Stella had transformed. She had straight white hair and wore a blue super suit covered in stars. She was... Superstar?!

"WHAT?!" screamed Tara, coming out from her hiding place. Stella flinched and turned, an orb of light on her palm, ready to be thrown at Tara.

"TARA?" she exclaimed, her eyes widening under her mask.

"Stella. You are... Superstar? Why? How? What... What happened to you?" Tara was furious. How could she have hidden such a secret from her? Why had she not trusted her?

"I'm sorry Tara... I..." somebody screamed. "I promise I'll explain everything, okay? But I have to go now. Those people need me. They need Superstar."

Tara was still angry, but Stella was right. She let her go.

"Do you remember the night of the storm?" asked Stella. She had saved the old lady and sent the two men to prison, then she had met Tara and transformed back into herself.

"The night you almost died? Of course I remember it. I thought you'd never wake up again." Tara trembled and Stella covered her hand with hers.

"Well, that night, when I was struck by the lightning, everything changed. I raised my arm to protect myself and the lightning struck my bracelet." she touched it, stroking the star. "I told you I had bought it, but this was actually the bracelet you gave me for my sixteenth birthday."

"What? But... but it was white and I just bought it at the mall. It wasn't so... rich-looking. Are you telling me that the lightning turned a ten-dollar bracelet into a gold one?"

"Wow. Maybe I should consider getting struck by lightning too." Stella laughed.

"When it became gold, I felt the electricity curse through my body. And then I had white hair and I was dressed in that super suit. I touched the bracelet again and I detransformed. Then I fainted and that's when I was found."

"Why didn't you tell me? I could have helped you save the city." Stella looked down. A tear rolled down her cheek.

"I... I didn't know how you would react. I thought you'd try to help me, and then get hurt. I didn't want to hurt anyone. I felt so alone."

"Well, you're not alone anymore." Tara smiled. "Now you've got me. I'll help you, Superstar."