Superstar pt1: Superstar and the weird robot
Published by Sofia A. on 2022-04-29 in Detective 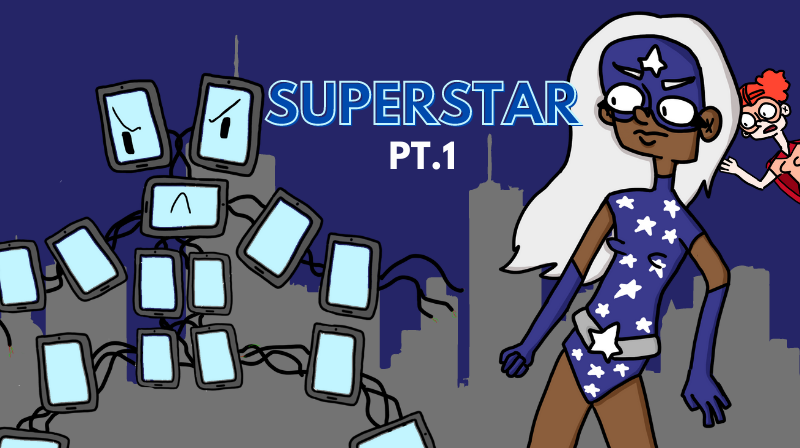 Tara and her best friend Stella were at the mall. They were doing their homework sitting at a table outside the café with two cups of iced coffee next to them. It was a regular day, a calm Friday afternoon, but nothing stayed calm for long in their city.

The mall's electronics shop exploded right in front of them and from it emerged a monster made up of TVs, computers, and cell phones. Everybody started screaming as the robot came forward. It tried to grab some children, but they all escaped.

Tara stood up and turned to Stella. Her friend had already started running away. "I'll get help!" she shouted. Tara sighed and told the other frightened people to hide.

She was helping a pregnant woman duck under the table inside the cafeteria when she saw it. A bright white light approaching the enormous robot. "Everything will be alright." she told the woman. "Superstar is here."

"Thank goodness." whispered the woman. Tara came out of the cafeteria. She wanted the see the superhero.

Superstar had appeared in the city a year before, helping many people against some weird supernatural attacks. She was a black woman with white hair, she could fly, summon lights, and wore an awesome dark blue super suit full of white stars, complete with a dark blue mask that covered her eyes and went all the way up to the roots of her hair. She was beautiful and so cool.

This time though, Superstar seemed unsure. She kept flying around the robot, but she was just annoying him. She shoot some lights at him, but they just seemed to charge him. Tara looked left and right, trying to find something to help. There were only people running away, shops that were closing their doors, and... the humming of water. The fountain! The mall had a pretty big fountain with the statue of a Greek god holding a gigantic fork.

"Superstar!" Tara shouted. "The fountain! Computers don't work in water!" the superhero looked at her and nodded. She circled around the robot, then she sped towards the fountain. The monster chased her and wasn't fast enough to stop when she flew over the fountain. It collapsed inside the water, computers and cell phones turning off, their screens completely black.

Superstar had already disappeared when Stella arrived, breathless, with her curly black hair tied in a top-knot, her dark skin glistening with sweat. "I-I tried calling the police, bu-but my phone wasn't working and when I found one they told me that the problem was already solved." she raised her head and grasped Tara's hand. "Was Superstar here?"

"Yes, you missed her again. Third time this week." said her best friend. "You're always running away."

"I just try to help everybody."

"That's very Gryffindor of you." said Tara with a laugh. Stella laughed too.

"Come on, let's get our homework done."

"Sure, I just need to go to the bathroom. Too much excitement." Stella smiled and nodded, letting go of her hand.

Tara turned and went toward the bathroom. There was something strange going on with Stella. She disappeared way too often. Next time she was going to go after her.